The Germans love a good moan about high-speed internet connections. But even here in Germany, installation of the network is progressing. So what’s the current status?

Although most discussions recently have been about the fifth generation of mobile communications (5G), the implementation of the fibre-optic network also has an important part to play in high-speed connections for enterprises and private households. We don’t want to bury the bad news: unfortunately, the repeated criticism about broadband rollout in Germany is, in many places, still justified. But there are signs that the situation is improving, both for businesses and end customers.

For all stationary broadband connections in Germany, the fibre-optic proportion was just 5.4% at the end of 2020. In 2019 it was 4.4%, and 3.2% at the end of 2018. These figures come from a survey by the OECD (Organisation for Economic Co-operation and Development). Other countries are far ahead of Germany in implementing fibre-optic broadband. Leaders of the pack are South Korea and Japan, with 84.8% and 81.6% respectively. Top of the board in Europe are Lithuania with 76.6% and Sweden with 75%.
The OECD calculated that the average is 30.6%, that is to say, far higher than the proportion achieved so far in Germany. Greece is at the bottom of the table with 0.2%. Austria is also lagging behind on 4.4%.

However, here in Germany our score for “technical coverage” is a little better. This is not identical to the number of fibre-optic access points actually in use and, according to the FTTH Council Europe, is currently around 10% in Germany. Only one in three (33%) potential customers in Germany actually seize the opportunity and use the fibre-optic connections available to them. The average across the EU countries surveyed is 43.3%.

For fibre-optic rollout, Germany is still one of the poorest performing countries.
Source: OECD

One million new fibre-optic connections in 2020

A joint study carried out by the market research company Dialog Consult and the VATM (Verband der Anbieter von Telekommunikations- und Mehrwertdiensten) reaches similar conclusions. According to the “22nd Telecommunications Market Analysis Germany 2020”, last year there were around 5.1 million fibre-optic connections. Just 1.87 million or 36.6% of these are “active connections”. The rest are “available, but not active”. Nevertheless, the proportion of active connections in recent years has grown steadily. Another positive worth noting is that the total number of fibre-optic connections in Germany has increased by around a million compared to the previous year. This growth of around one quarter is hopeful.

The predictions of the FTTH Council Europe also give cause for optimism. The organisation estimates that, by 2026, the market penetration for fibre-optic connections will be around 59% of all households in Germany. After all, this is a little better than the average market penetration of 57.8% predicted for 39 European countries. So it looks like Germany is catching up. 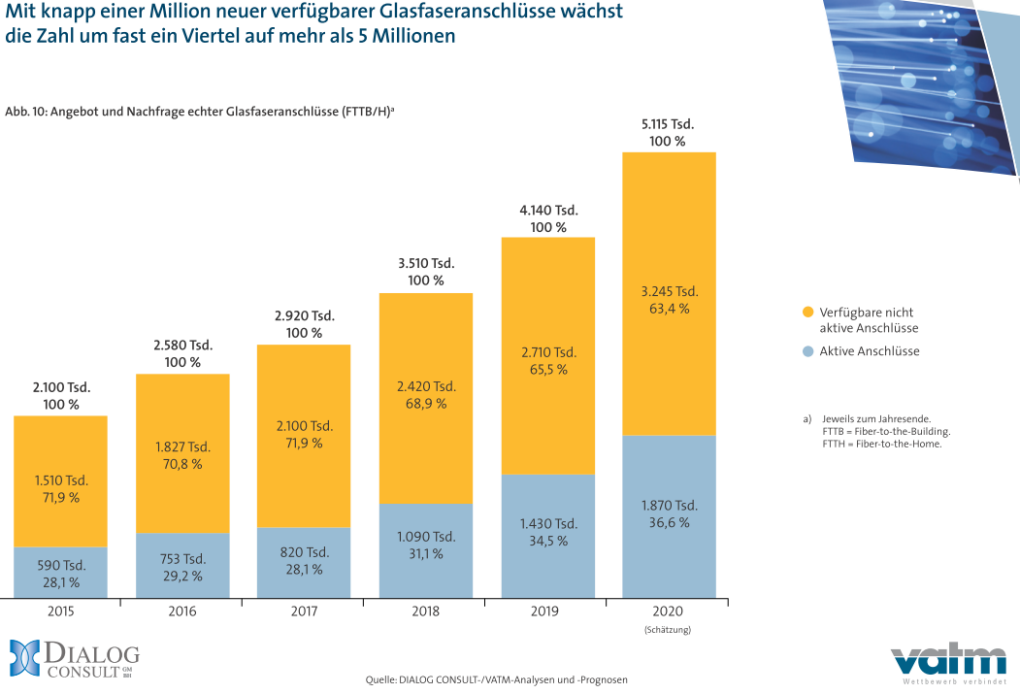 Image text: Only 36.6% of the available fibre-optic connections in Germany are currently in active use.
Source: Dialog Consult/VATM

Naturally, the sluggish fibre-optic rollout is closely linked to the telecommunications providers. However, most of them are intending to intensify their efforts significantly in the years to come. Deutsche Telekom announced that it wants to provide all German households with fibre-optic connections by 2030. The formerly government-owned company hopes to connect up to two million households per year to the high-speed broadband network alone. Despite Corona, the rollout is running at top speed, said Tim Höttges when he presented the plans. He has been CEO of Deutsche Telekom since 2014.

Höttges emphasised that the fibre-optic rollout is a task for all of society. More needs to be done together. For example, Deutsche Telekom would like to cooperate with local suppliers. Approvals processes also need to be speeded up. General acceptance of “alternative laying methods apart from underground work” would simplify and accelerate a lot. 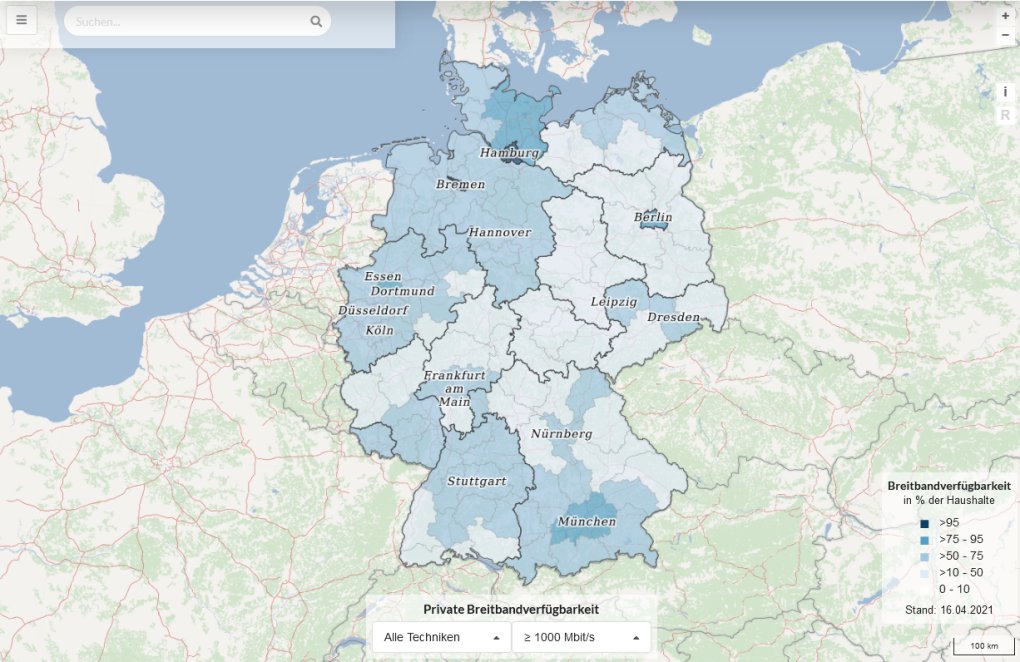 On the Federal Ministry of Transport and Digital Infrastructure website, there is a broadband atlas showing, for example, the supply status of connections faster than 1,000 MBit/s.

According to the VATM, 38.9% of broadband customers overall (not just fibre-optic) are supplied by Deutsche Telekom, followed by Vodafone with 30.3%. However, according to the company’s own information, the British telecoms provider currently only supplies 50,000 companies and 150,000 households with fibre-optic connections. This is rather modest compared to the market leaders. All the same, the take-up rate with the competitors is significantly higher than for Deutsche Telekom. The take-up rate is the number of customers who actually use the fibre-optic connection available to them. According to the VATM, this was 42.6% for the competitors last year. That’s compared to 27.1% for Deutsche Telekom.

The biggest reason Germany is lagging behind in its implementation of fibre-optic connections is the high cost – which can quickly run into billions – causing telecommunications providers to shy away from doing the work. Usually, they need to lay completely new cables for fibre-optic connections, and that costs money. In contrast, existing telephone lines can be used for DSL or even VDSL. Nowadays, thanks to new G.fast technology, transmission rates of up to 1,000 MBit/s are possible using traditional copper cables. However, the range of the G.9700 and G.9701 standards developed by the International Telecommunication Union (ITU) for this purpose is less than 250 m. Even at shorter distances, loss of performance is common.

Another limiting factor is the success of 5G technology. The LTE successor is considerably cheaper to implement than a full coverage fibre-optic network. But fibre-optics can offer higher reliability. Another obstacle is some customers’ lack of interest in a fibre-optic connection. So before telecommunications providers become active in an area, they usually carry out surveys of potentially interested customers. And, if too few contracts are signed in advance, the rollout is postponed.