Optimisation and restructuring of government IT with Cisco Meraki

The changeover to new switches from Cisco Meraki and centralised management via the Cloud frees up even small teams to spend more time on other tasks.

The government in Germany is unable to keep pace with the wishes of its citizens. Applying for family allowance, registering a new address or reporting potholes in the road – these are all things that many Germans would like to do from the comfort of their own living room. But, up to now, the authorities that are meant to provide these services have few online services to offer. So people have no choice but to go in person to the relevant authority, where they are often subjected to long waiting times – a situation that attracts a lot of criticism. “Queueing at government offices and the laborious paperwork involved in applying for documents and benefits cost valuable time and make our life unnecessarily complicated,” says Bernhard Rohleder, the CEO of Bitkom.

The German National Regulatory Control Council (NKR), which advises federal authorities, has even identified “a structural deficit” in government IT. But the federal government is taking action. In 2017 it passed the Online Access Act (OZG), which obliges both central government and the regions to “also offer their administrative services in electronic form via administration portals” within five years and to “link them together to form a portal network”.  So the clock is running.

Experience from the USA with Cisco Meraki

Positive examples from the USA demonstrate how digitalisation can be implemented successfully. For example, the City of New Haven in Connecticut, a town with more than 130,000 inhabitants, faced the problem of modernising its government IT infrastructure with a tiny team consisting of just three members. This involved around 55 sites with a total of approximately 1,600 employees. The existing network had not been updated for a relatively long time. It used unmanaged switches and there was not even wireless access.

However, the network in New Haven was not simply slow and old: issues often occurred whose causes were hard to determine, which is why troubleshooting sometimes took several days. During this time the IT team’s hands were tied and they could not deal with other tasks. It quickly became clear that, among other things, one reason for the persistent problems was the uncontrolled proliferation of hardware and software from numerous manufacturers and different firmware versions on the switches.

Management of all devices via a central dashboard

What finally convinced the IT department to switch to Cisco Meraki products was the possibility of managing all existing devices via one single interface. The first step was to replace all edge switches with Cisco Meraki MS350. This Cloud-managed switch is the current flagship in the manufacturer’s switching portfolio. The Layer 3 switch is designed for high-speed connections and a high level of availability. The changeover of the network devices was successfully completed in just two weeks.

Since then, it has been possible to manage all switches centrally and load firmware updates remotely. Previously, the employees from the IT department had to drive to every site, check the devices used there one by one and update them if necessary. That is why some switches would go years without receiving new patches and many gaps in security could not be closed. And often component failures were not noticed until hours later. Now the central dashboard from Cisco Meraki is all that is required to do what is necessary remotely. Should a component fail, the administrators receive an email alert straight away. Thanks to the integrated remote management functions, they can even intervene from home and resolve issues more quickly. 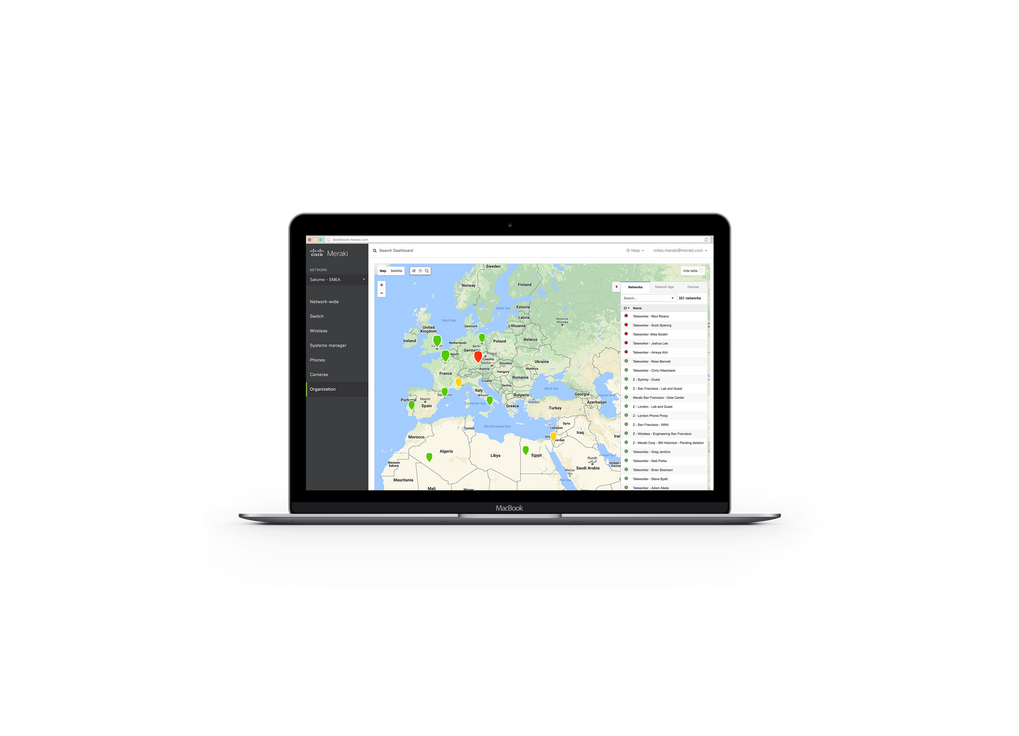 Up until the changeover to Cisco Meraki products, the City of New Haven only provided its employees with wired network connections. But that too changed with the migration. The IT staff installed wireless access points from Cisco Meraki at the various sites. The WLAN that was created is mainly intended for the City’s own employees. However, public wireless access was installed at key sites such as city hall and in conference rooms. The City also uses a total of 14 different SSIDs, some hidden and some public. Depending on the configuration, the employees’ WLAN-enabled devices can access either one or a number of these SSIDs. Wi-Fi services can also be used seamlessly thanks to the available roaming capabilities. Furthermore, with the aid of a heat map, administrators can recognise how usage is spread and where connectivity issues might occur. 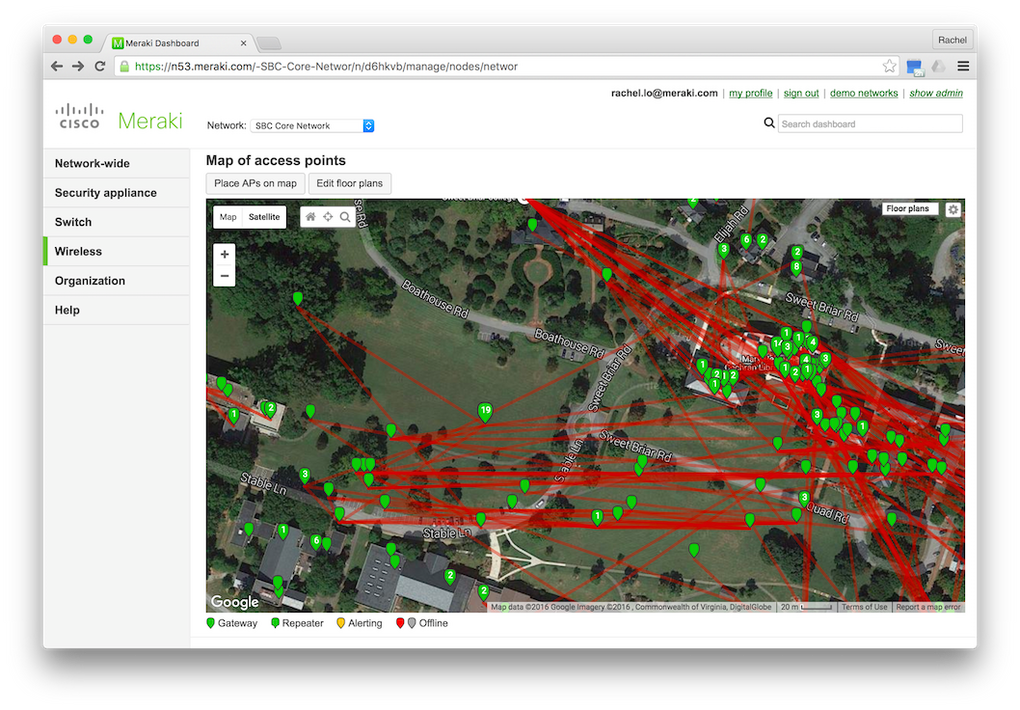 A further function that the City has had at its disposal since the changeover is a modern VPN (Virtual Private Network). Previously each VPN access had to be set up individually. The Cisco Meraki Z3 Teleworker Gateway connects to a Cisco Meraki MX100 security appliance, which provides the network access. It features functions such as a next-generation firewall (NGFW), content filtering, intrusion detection and WAN optimisation. Meraki Z3 Teleworker Gateways are even equipped with a PoE (Power over Ethernet) port, which means that a VoIP telephone can be connected, for example. This can then be used to contact employees at home.

The switch to Cisco Meraki products has paid off for the City of New Haven and its staff – and also for its citizens. Thanks to pre-prepared templates, new switches can now be deployed in just a few minutes. Entering the serial number on the dashboard is all it takes for the initial configuration. Continuous monitoring of the network is no longer a problem. The IT team always knows which clients are connected and which applications are being used. Updates can now be managed and loaded centrally, and remote functions can monitor the antivirus status on the clients. A further benefit is that it is no longer necessary to grant VPN access.

If you yourself are contemplating upgrading your switching infrastructure, be it in an enterprise or government network, get in touch with us. HCD Consulting will use its extensive experience of projects and technology to support you in any kind of situation. What is more, you can also arrange your hardware purchases through us. Just get in touch. We will be happy to advise you on a wide range of topics. 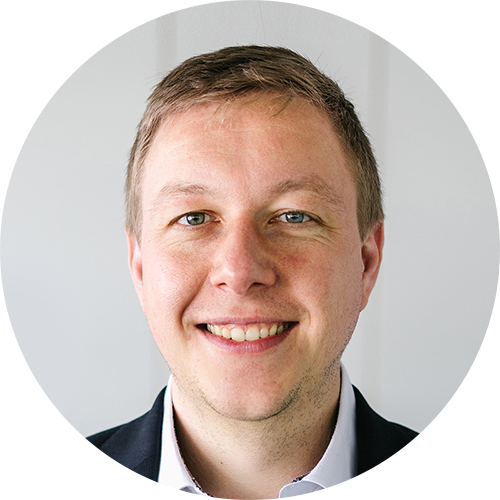